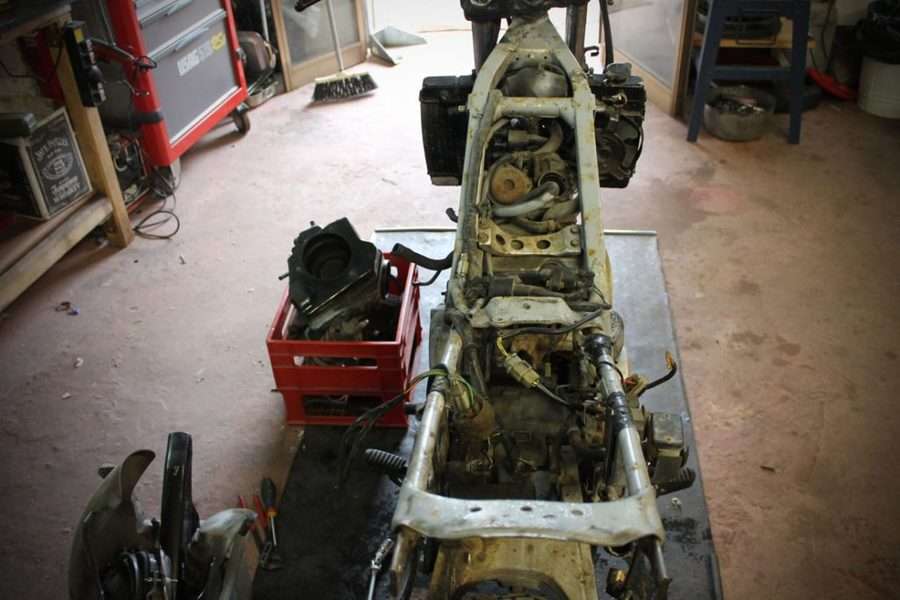 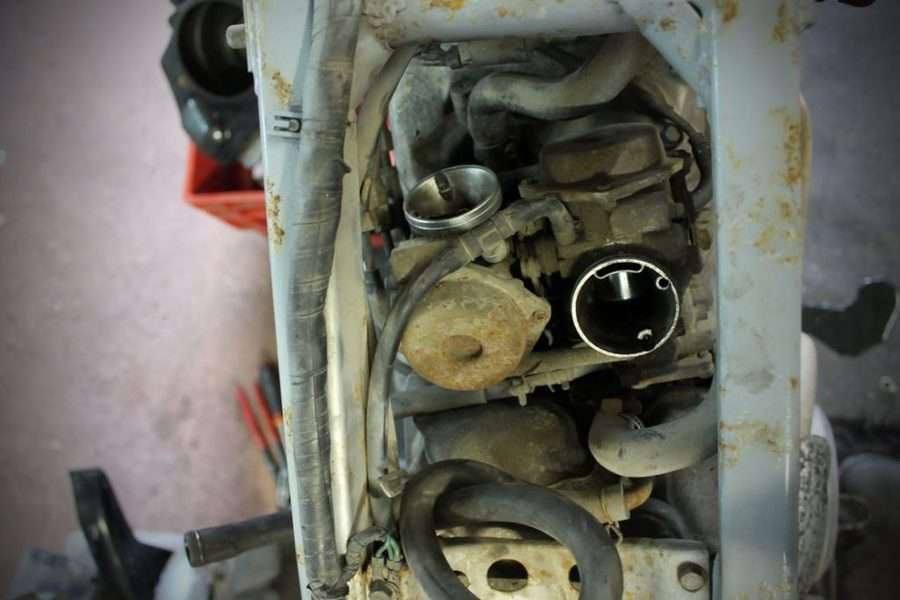 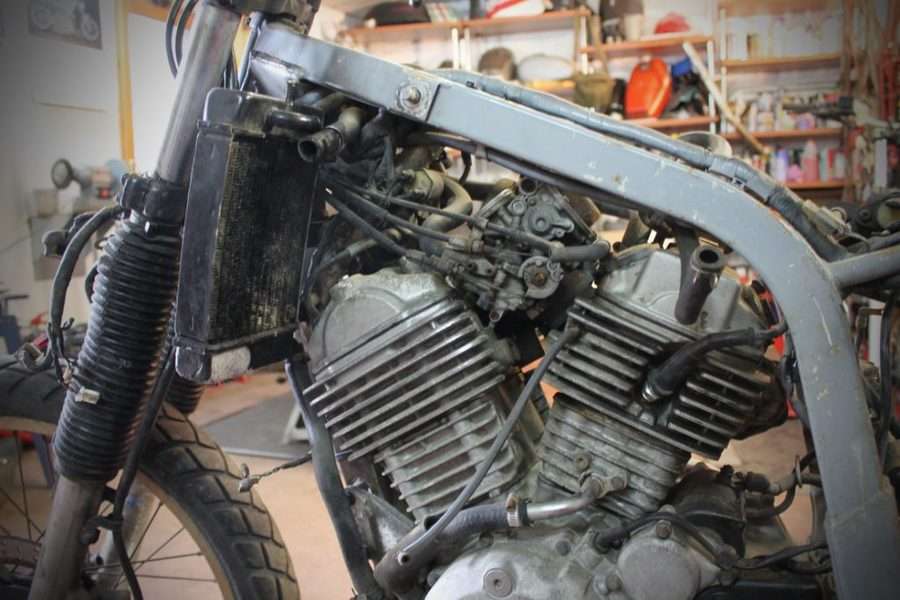 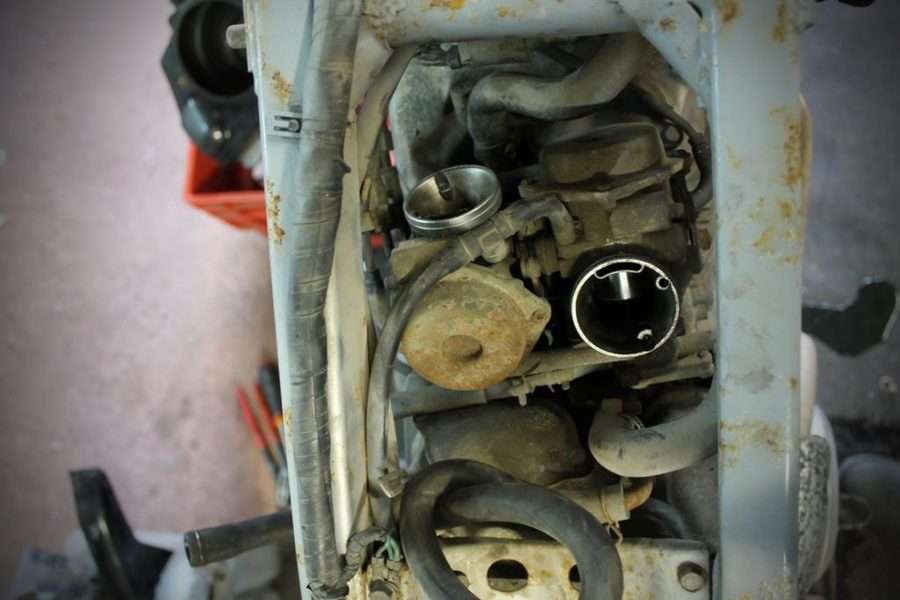 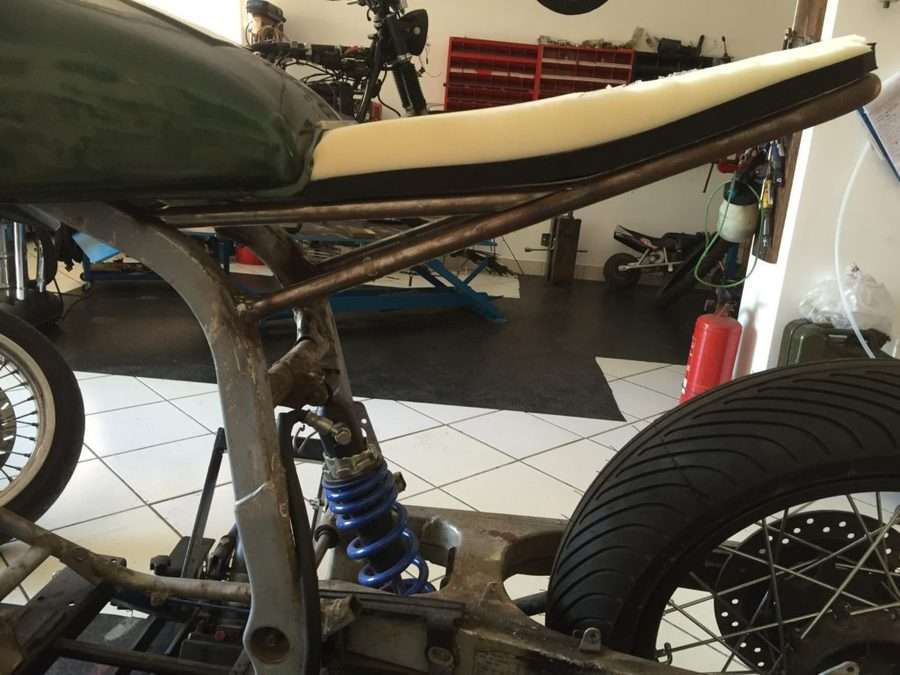 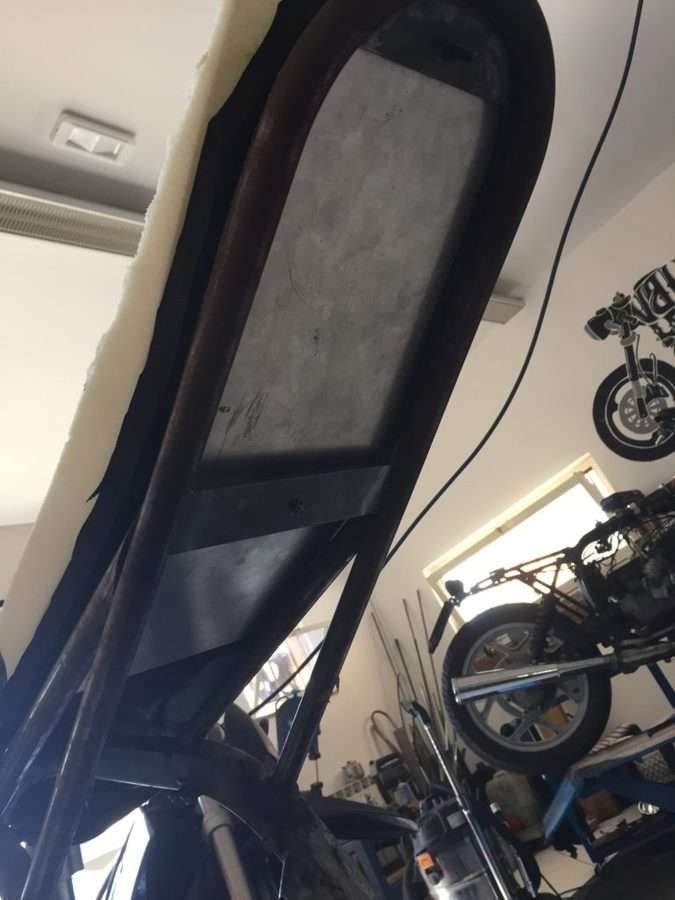 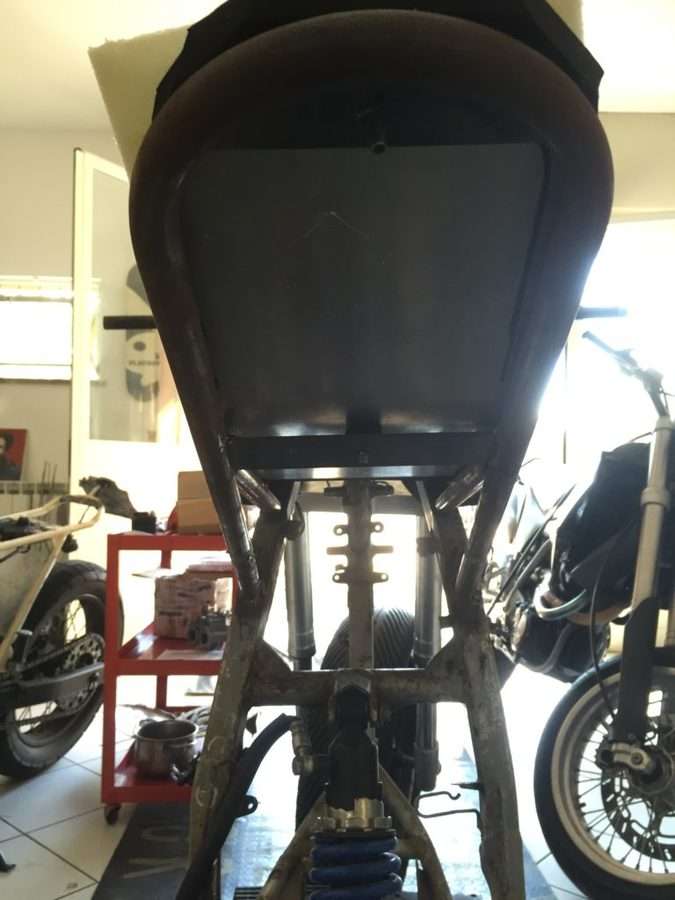 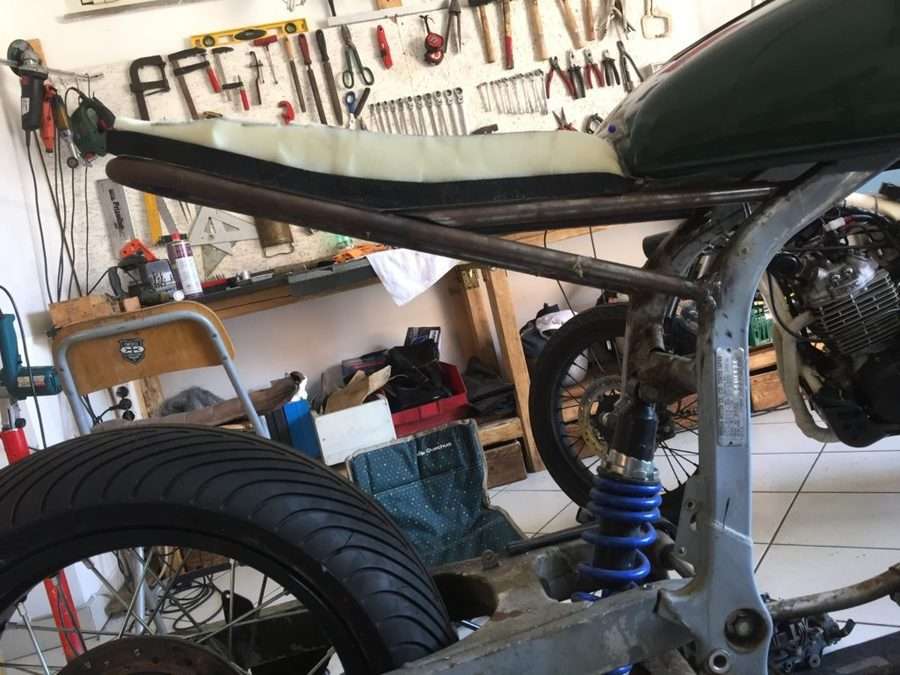 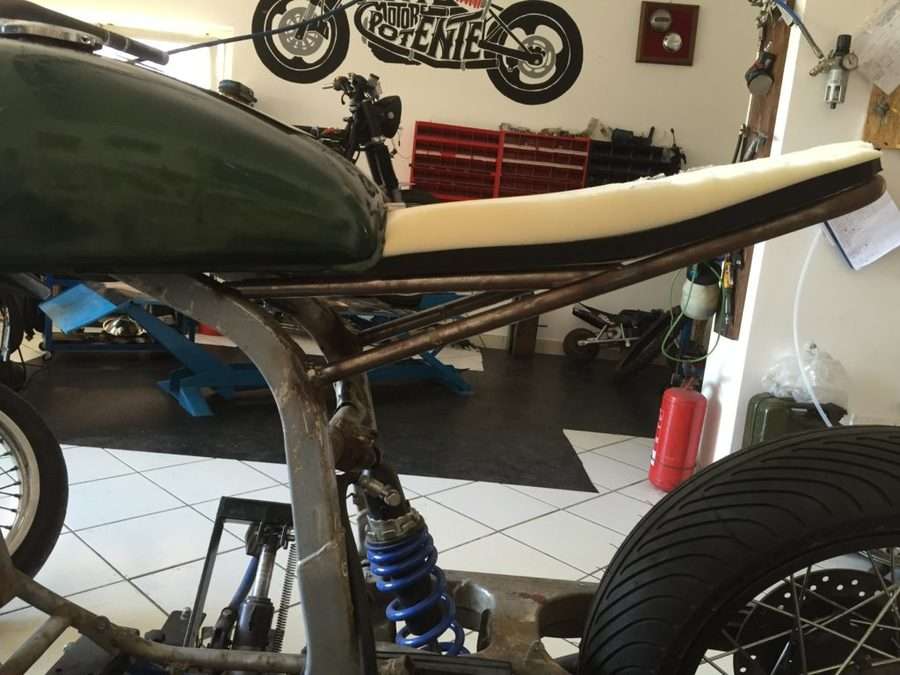 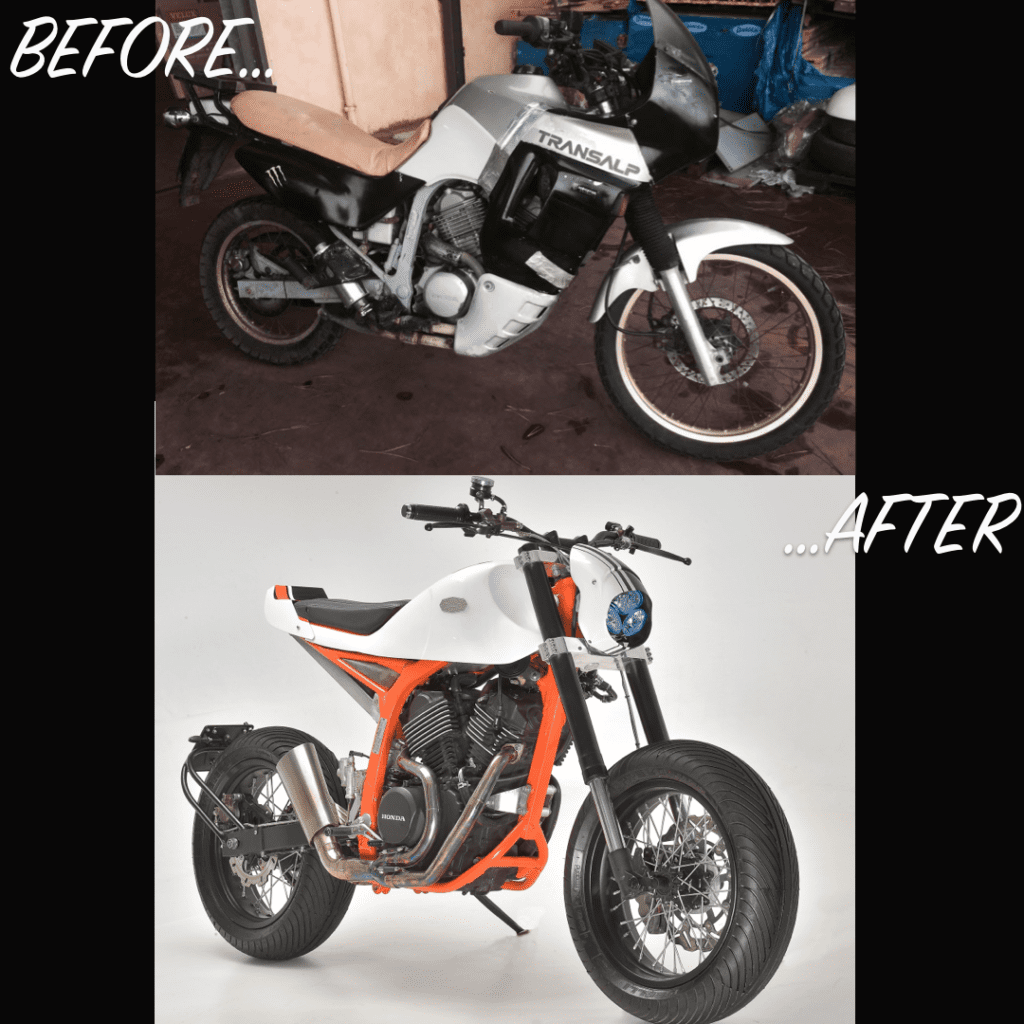 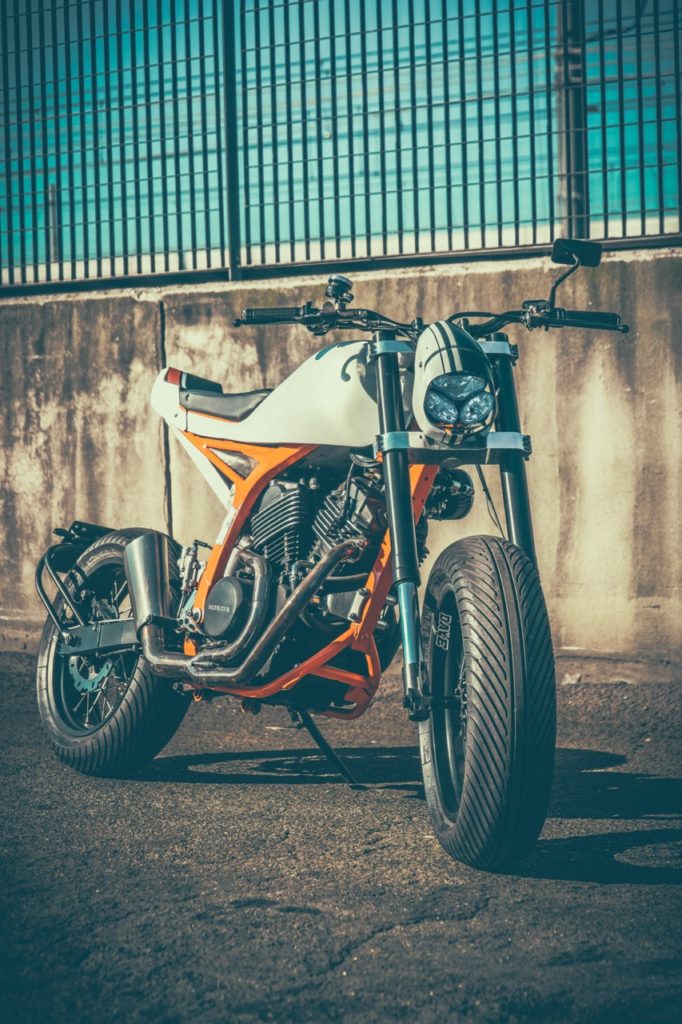 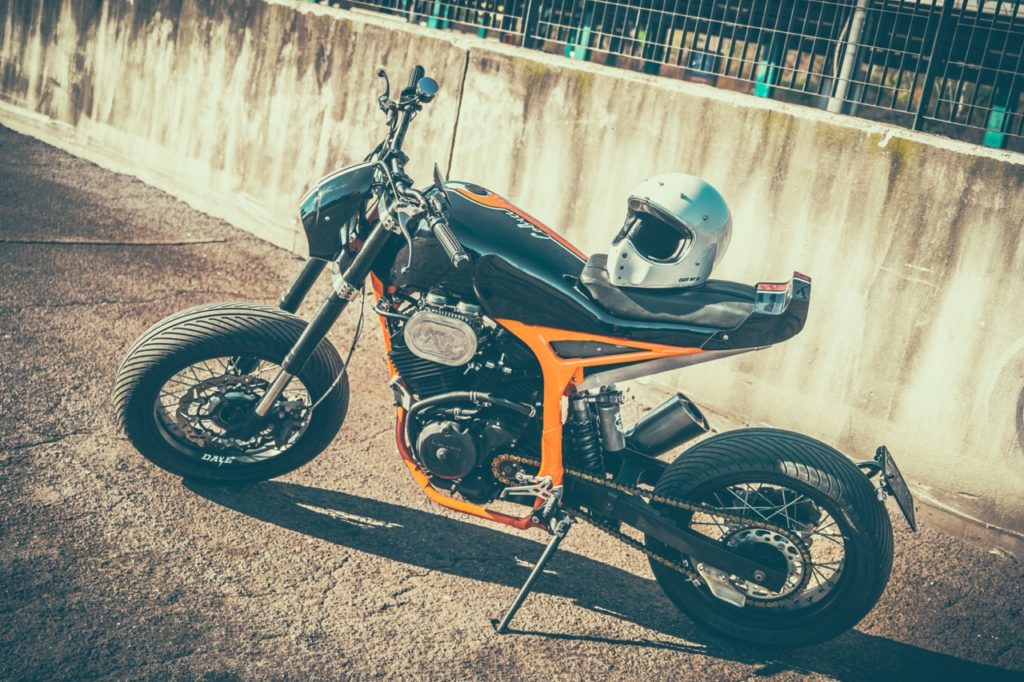 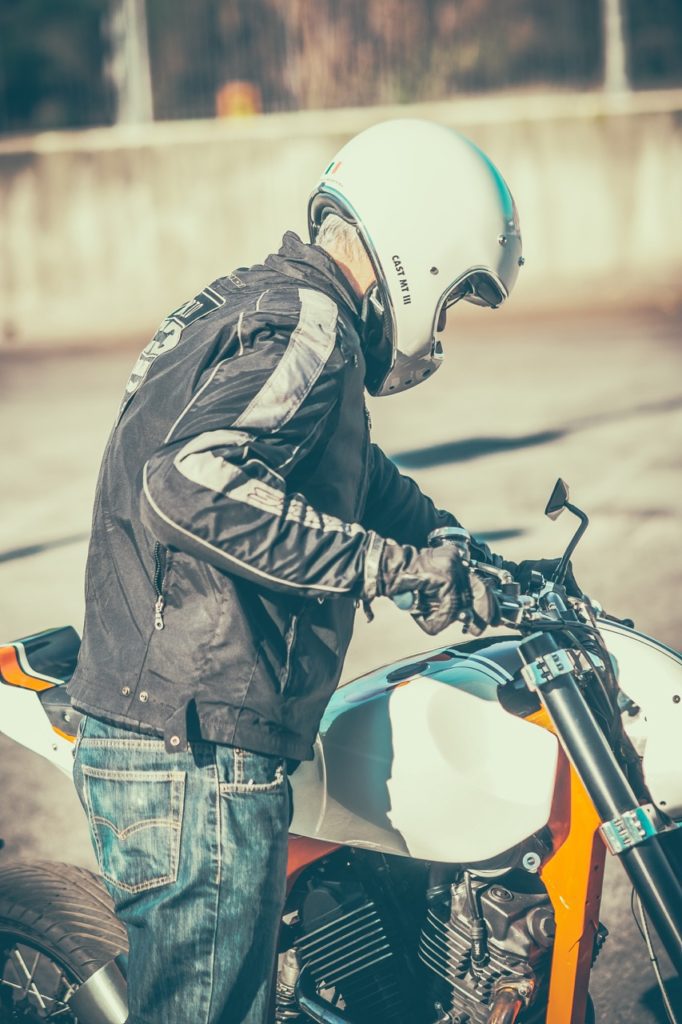 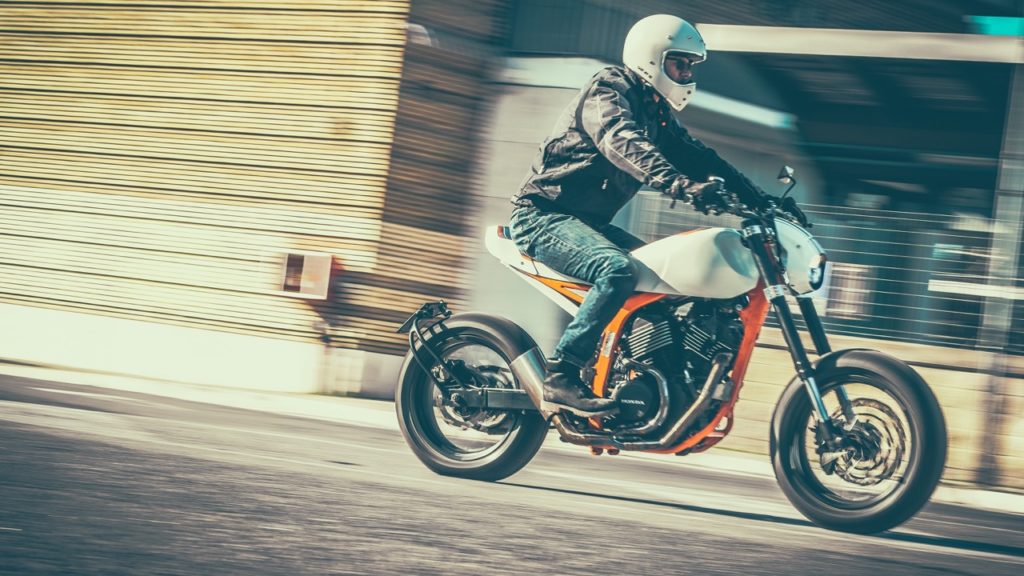 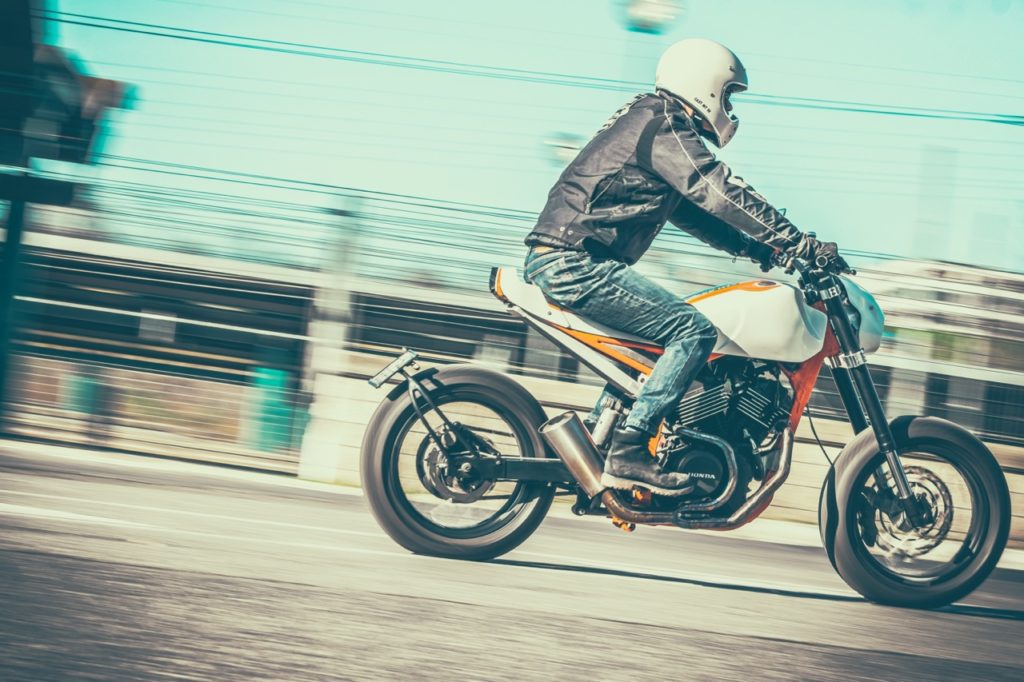 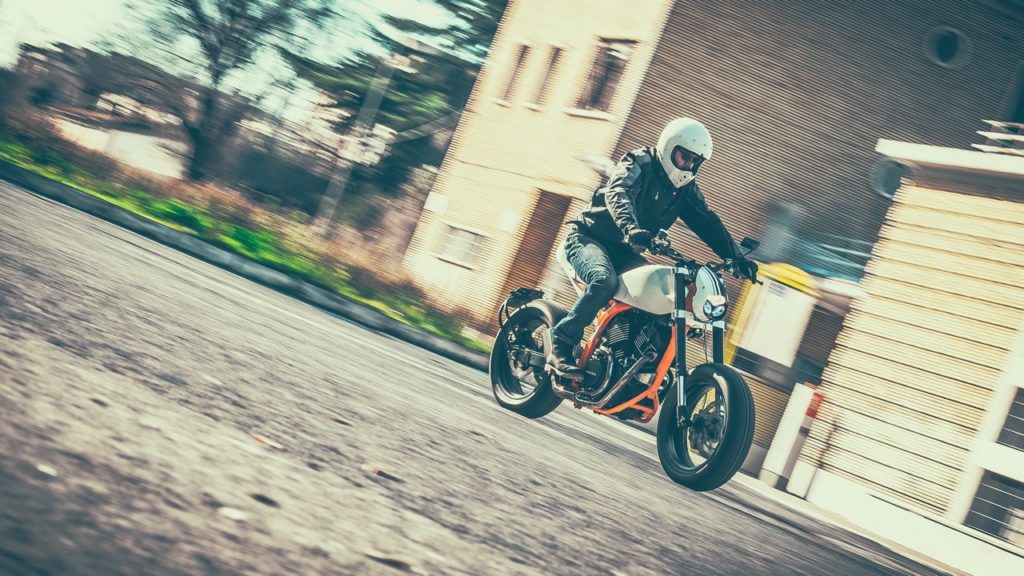 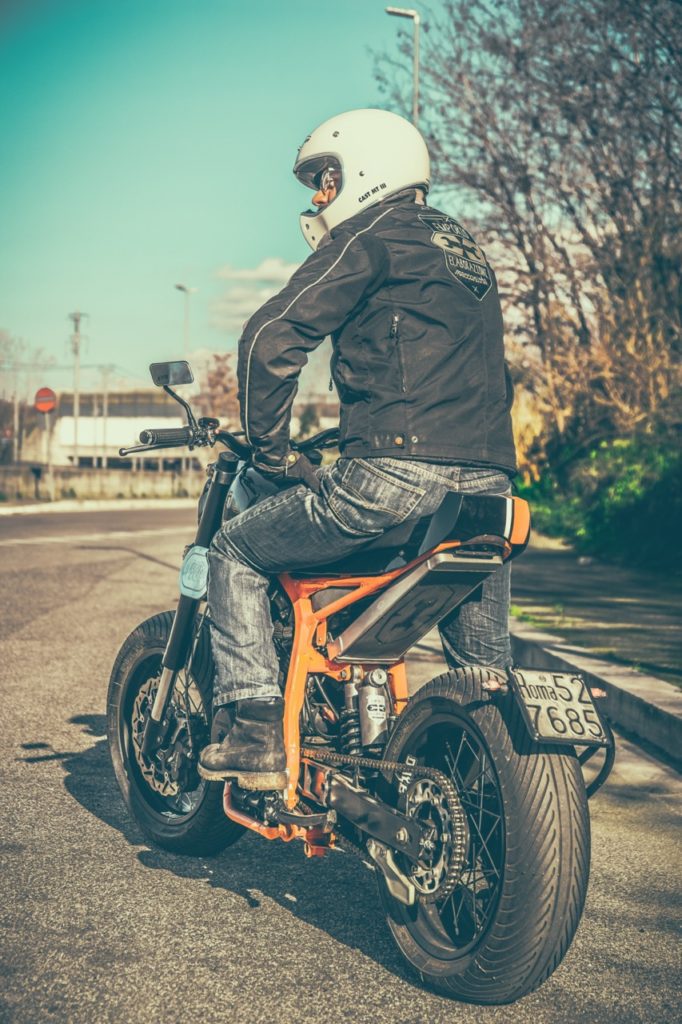 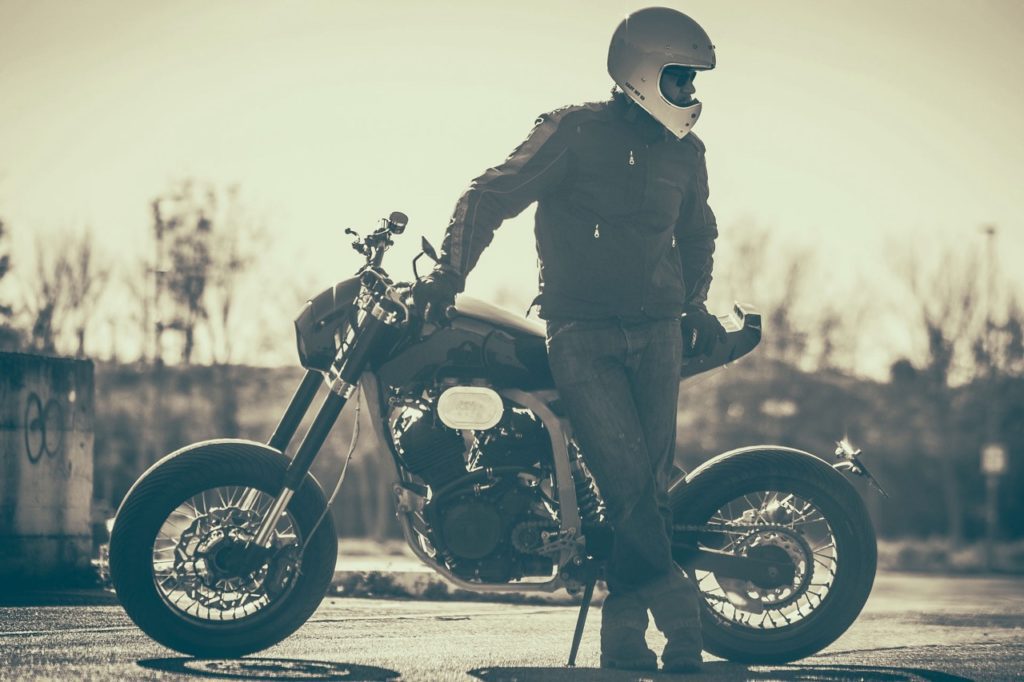 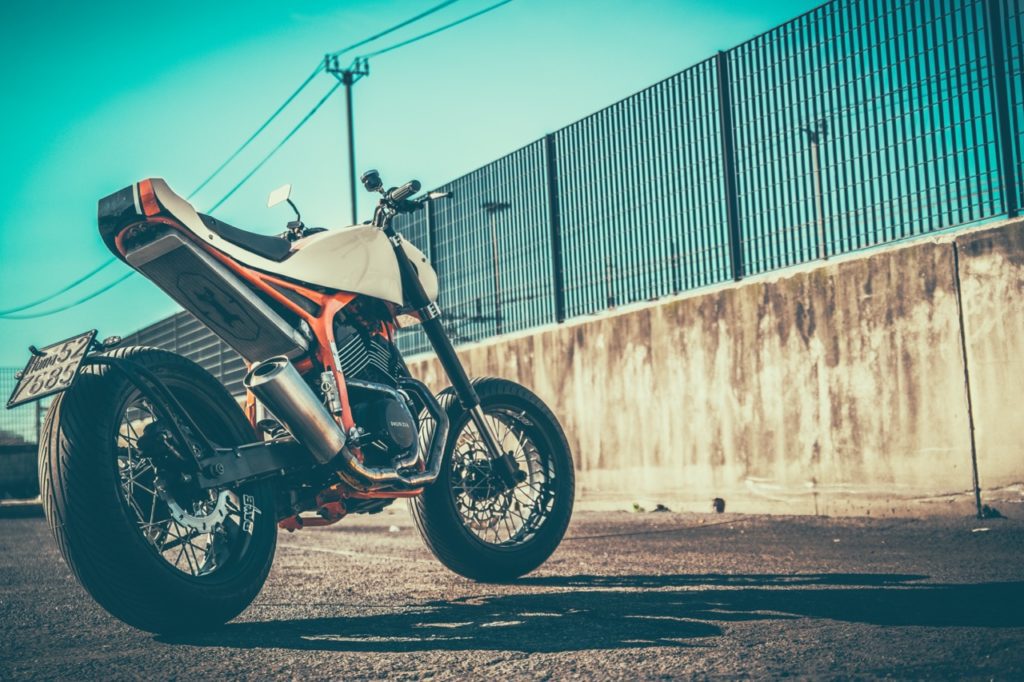 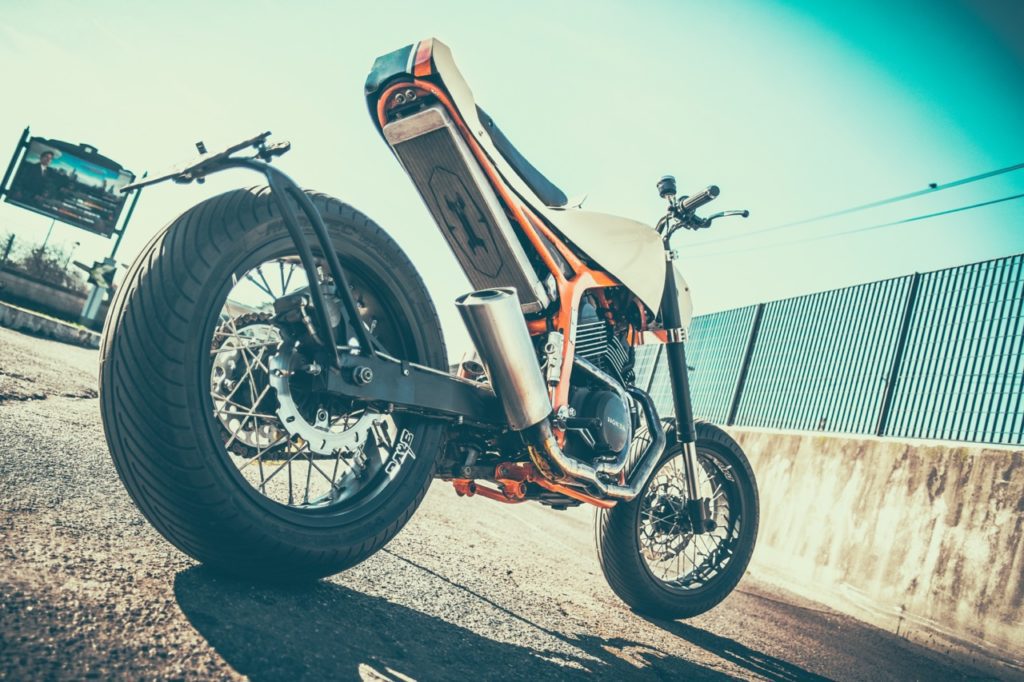 the customer comes to us with this totally rusted old 1987 Transalp ( leaved for years at open air near the sea) telling us he would liked a power muscle bike that, we quote: ” it should seem like it can ride over the wall”… Gosh!

We started from sktretch… TRansalp is very hard to modify cause the frame, the engine position, the asimmetrical parts and the  2 radiator… mix them with tons of rust and you can understand!

Nothing was usefull instead the engine. we wait a lot for an inspiration, take our time, did some sketches and started throwing away 99% of the bike.

After several months we started building…

A part of us started rebuildin the engine, the rest of the team started using a part of the frame and old Honda custom tank and a lot of clay to build a Mockup.

We decide to build a one-piece shell in Carbon and Fyberglass so we built a small frame from top to bottom to have the bike opening like a sporty car hood and support the shell used for the tank and the seat.

The tail turns upside down to permit this opening.

Opening the shell permits to arrive to all the electrical parts and to check the radiator. The opening movement is helped by a piston.

We re- engineered the cooling system,  projected one big radiator protected with a good steel net put in the rear of the bike. It’s cooled in both side: one with a fan under the seat and the other one with the air moved by the rear tyre from the opposite part creating a good air exchange.

Projected also a completely new electrical wiring system to having new function for the service buttons (light, instuments, blinkers). The buttons are also produced in Emporio, in addition to Motogadget ones.

Designed and built the front light too using 2 different type of head-lights and covered with carbon and VTR small fairing.

The fuelling is totally reprojected too. New carbs (Mikuni), new position of the carbs ( outside on the left side), new filter, new fuel feeding.

MAchined an over size triple-tree to have a 180” Rain Tyre in the front as the rear . This bike is not focused for hgh speed and curves but for sprint and soft drive experience.

The name comes from the tank, its shape looks like a snake head.

The bike is incredibly light and powerful, thank to the engine works and the loss of weigth …and easy to drive instead of those fat tyres!;-)

Guys from E!Design suggested to paint in 2 color Black and White cause for Cobra has two souls. 1 aggressive and sporty , one elegant and minimalist. We agree!

if you need more infos, text, pic or whatever… write me!!